Have Breakfast With Your Son

I love breakfast time. I’m an early riser and so is my eldest son. Not as early as I am (thankfully) but early enough so we can enjoy breakfast together. Not just eating, but preparing it, anticipating it and talking while we hang out together. Here’s why to get into this practice. 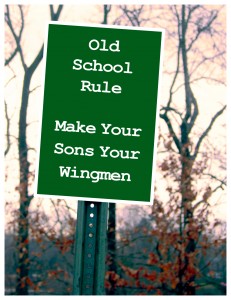 Have breakfast with your wingmen

At the end of the workday you can come home frazzled, tired, beat, elated, aggravated or all of the above. In other words, a workday – especially an entrepreneurial workday – can leave you in a variety of conditions. But a good night’s sleep? That just leaves you ready to completely focus on whatever is in front of you. And that’s most important when your boys are in front of you.

A couple of centuries ago, when life was much more agrarian, sons spent all day with their fathers, from sun up to sundown. Now? Not so much.

Kids go off to school (if they’re not home schooled).

Dad goes off to work.

If things work out, Dad gets home in time to spend some time with his sons before everybody hits the sack. If things don’t work out, Dad doesn’t see his boys at all.

Saturday morning on the road

Not enough Dads have their sons as wingmen.

Buck this trend. For a lot of dads Saturday is the day to get the work done that doesn’t come with a paycheck, usually involving trips to the hardware store, barber shop, mechanic or some other thinly veiled imitator of the Little Rascal’s He-Man Women Haters Club. Start that day with breakfast on the road.

Finally, a breakfast favorite
at our homestead, the tortilla

“Tortilla” means different things in Mexico and Spain. All my grandparents came from Spain, so to me growing up tortilla wasn’t a chip or a kind of flat bread, like it is in Mexico. In Spain, tortilla is an egg dish. It’s also one of the best father-son-hunger satisfying breakfasts on the planet. With a tortilla, the world of omelets forms into a pie shape and takes on casserolean[1] properties.

Here’s how to make a basic tortilla. Feel free to experiment. It feeds about two to three manly Old School bellies.

Put a ten inch, greased, cast iron skillet on medium heat. Non-stick skillets are, like margarine, of the devil and not to be considered. Grease it with olive oil or butter, whatever you got. Non-stick spray is of the devil, also.

While that heats up peel two medium size potatoes.  Cut’em up in to half inch slices about the size of poker chips (Old School recipes should always use manly descriptors whenever possible. I’m still trying to find a place to say, “form the meatballs into balls the size of your enemy’s barely beating heart.”).  To make the whole potato aspect easier, toss the potato slices in a microwave-safe bowl filled with water. Put the potatoes in the microwave for 10 minutes.

While this goes down slice up an onion and a green pepper. Toss them into the pan. By now the potatoes should be ready. Drain the water and toss potatoes in the pan.

If you want to do it up right (and I know you do), this is when you toss in some sliced already cooked chorizo. Chorizo is a sausage that has Spanish, Portuguese and Mexican varieties, both spicy and sweet. Growing up I was blessed to have a very “chorizo-centric” worldview. This comes courtesy of many of my relatives, especially those in the very Spanish town of Donora, PA.  Many of the backyards of this town (like many small towns of forty plus years ago) actually had smokehouses. Imagine having your very own sausage factory in your backyard … it’s OK, fellow dad, dream big … dream big.

Don’t have chorizo? Don’t sweat it. If you promise not to tell any of my Spanish relatives, I’ll admit I occasionally chop up a few Nathan’s franks for my tortillas.

Cook until the potatoes are slightly crisp on the outside and soft on the inside. This involves frequent tasting to potatoes throughout the cooking process. Anal-retentive busy bodies rely on a timer to know when something is done. Old School men taste. Frequent tasting is a time honored part of all Old School cooking and should be embraced. When you are cooking along side your boys (giving them as much of the preparation as they can safely handle) the should be rewarded with frequent tastings. There are few better ways to say, “Yeah, we’re family,” than to say to someone, “Taste this. It ready yet?”

As the potatoes, onions, peppers and sausage do their thing, get six or seven eggs. Crack them in a bowl and mix.  Add a little more olive oil to the pan. Pour the eggs over the previous ingredients. As the eggs cook, pull back the edge of the now forming tortilla to the center to allow more egg to get to the edge and bottom to cook.

After a couple of minutes flip the whole thing over. Don’t worry about doing it one piece. Just flip it in two to three sections then quickly reform the tortilla back into shape with the spatula. Cook for a few more minutes. There’s a learning curve to making these and remember, I’m a not Emeril Lagasse. Just make sure the thing is cooked all the way through and everything will be all right. Flip the pan over on a large plate. Cut into four slices and you’re downtown.

Posted under fatherhood,food and tagged with breakfast, fatherhood, tortilla
Comments (0)