A Parable: How Did SIX Chickens Cross The Road?

I have a chicken tractor (a portable chicken coop that I move around the homestead) in my backyard. It contains six hens or, as I greet them when I feed them, “Hello, ladies.”

I feed them. Make sure they have water. Get eggs when they give them. Keep things clean. It’s all pretty simple stuff. But it wasn’t always that simple. In fact, I made it much more complicated than it ever needed to be.

Up until these six chicks, I lived a live-poultry-free life. To prepare for this chicken choice, I…

And in the end most of this “preparation” was unneeded.

Here’s what happened. The Smokin’ Hot Wife and I mentioned to our boys we would be getting chickens. Now once you mention to three little boys you’ll be getting chickens, THEY WANT CHICKENS AND THEY WANT THEM NOW!! NOW!! NOW!! (Picture the angry villagers with torches storming the Castle Frankenstein and you’ve caught the vision.) There was only one way to stop their chicken chants. I had to buy the chickens and I had to buy them now.

Thankfully, this incident occurred in the spring when chicks are pretty easy to find. I went to my local hardware/feed store and bought six chicks and ten pounds of feed. The chicks were getting bigger and would outgrow the cardboard box in about 2 weeks, so building the chicken tractor was now a priority. For the uninitiated…

That’s it. Construction-wise, a chicken tractor isn’t much more than a triangular box, framed with wood. A few sides are wood. Most sides are chicken wire. And the engineering and aesthetic standards are pretty low. Why? As I said to myself during construction, “People aren’t living in this thing. Chickens are. Just get it built.”  And so I did. The few things I needed before the chickens were moved to their new home — more feed, water container — were bought at the local Tractor Supply after asking a few questions.

Much of success can be summed in the phrase, “Ready — Aim — Fire!” You make your plans (ready, aim) and execute (fire).

One hundred years ago if a former city boy moved to the country and wanted to raise a few chickens (assuming he didn’t already know what to do) he had two options for information. He could read one of the few books available on the subject or, much more likely, he would simply ask somebody who already had chickens.

Fast forward one hundred years to today. Same situation. The former city boy could still get the project done by asking somebody and maybe reading a single book. Unfortunately, if this former city boy was me, he’d also feel compelled to surf the web for useless information that had no bearing on the success of his chickens. It’s not that the information itself is bad. The problem happens when the time and effort that it takes to get the unnecessary information would be better spent on actually DOING something of value, like maybe getting those goats I’ve been thinking about or simply spending more time with my family.

Too Much Aiming Gets You Off Target

Look at this shooter. He’s ready and aiming. Aiming is a good thing. But if instead of aiming for a few seconds he aims for a few minutes, his muscles will fatigue and his shot will stray well off the target AND he will end up shooting at fewer targets.

The same thing happens with metaphorical aiming. Spending too much time in the “Ready — Aim” stage of a project won’t help you fire any better at your target (often worse) AND will prevent you from firing at other worthy targets.

So if over ready-aiming is so bad, why do we do it?

Here are a few common reasons

#1 Too much information & not enough common sense

There’s a scene in the movie Sling Blade where several men are struggling to fix a broken lawn mower. They are about to give up. Then Karl, a mentally handicapped man, offers to help. The men scoff, but Karl looks over the mower for two seconds. Then he looks up at the men and truthfully says, “It ain’t got no gas in it.” Huge laugh in a great movie.

Common sense would tell a person to check the basics — like the gas tank — first. Once you get the basics and maybe a little more, there will be enough time to get further details once you’ve starting taking actual action. Planning is important, but one when it produces action. Too much planning inhibits action.

What’s the difference between a man sitting at a computer playing solitaire for three hours and a man googling information for three hours? Not much. I can google up information on chicken coops or anything else from the comfort of my leather recliner. It’s pretty easy. Actually building the chicken coop or anything else requires me to get off my butt and actually work.

You can ask all you want online and maintain anonymity. Asking a real live human being requires you to admit your ignorance face-to-face. If I’m more willing to take an hour to research something online than take two minutes to ask someone, I’ve got to ask myself, “Am I just too full of myself to ask for help?”

Another benefit of asking a real live human being is they will often ask you questions back. Questions you need answered but would never ask in a week of web browsing can come up in just two minutes of conversation.

One way to see someone’s real priorities is to look at how they spend their time. Every project has a certain amount of time it deserves. Any more is spending dollar effort on a nickel project. Putting it more specifically, “It’s chickens and a coop, Sparky. Get the chickens. Build the coop. Done.”  I’m embarrassed to write this, but given the amount of time I spent ready-aiming, this project meant way too much to me. Seriously. We’re just talking about six birds! Again, foolish.

At its extreme, over ready-aiming can become, to use a Biblical term, idolatry. George W. Bush often used the phrase, “We are challenging the soft bigotry of low expectations.” If I can tweak that phrase to suit the topic at hand, I am trying to challenge the soft idolatry of misplaced priorities as evidenced by too much preparation.

When I write “idolatry”, I’m not talking about kneeling before a pagan statue. I’m talking about putting things above God. When the time I spend over-aiming is taking away time from prayer, Bible study, worship and family I am screwing up big time. If I’m spending time in church services thinking about the office, it’s not much of a stretch to call that the soft idolatry of misplaced priorities. 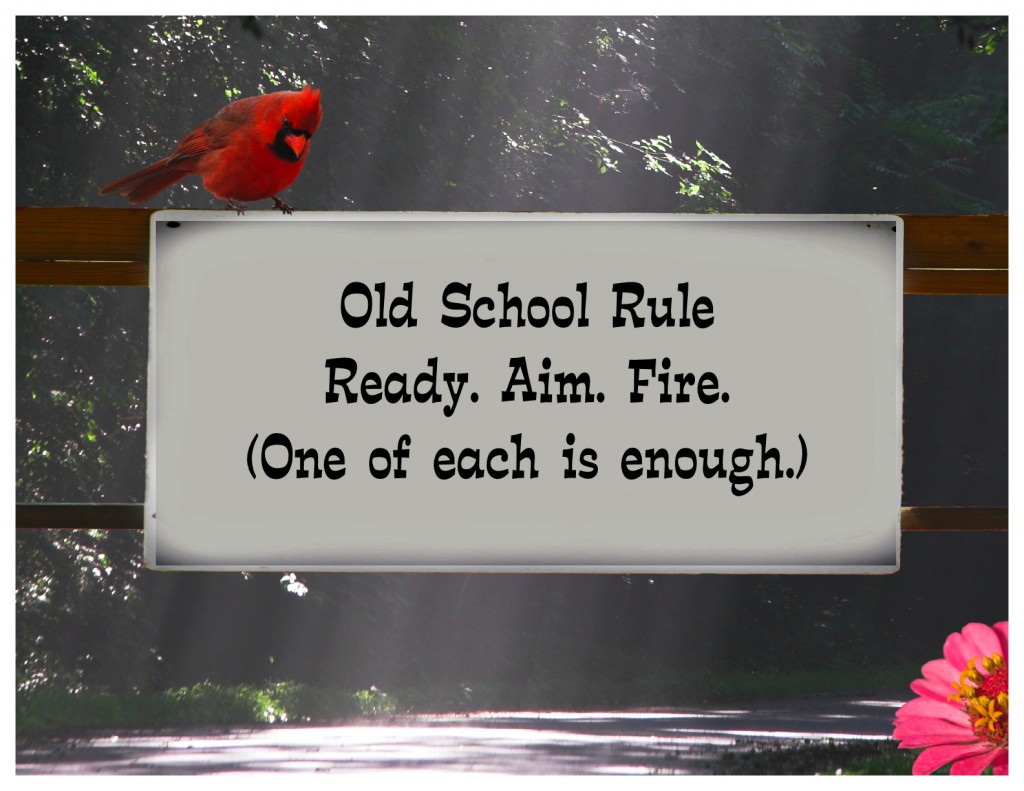 Keep it Old School, my friends

Posted under books,DIY,lifestyle,Theology and tagged with Do-It-Yourself, priorities, theology
Comments (2)

2 Responses to You’ve Read Too Much. Now Start Doing.