*Before you get caught up in my opinionated opining, don’t forget to click the link at the top of the page and “like” Old School Rules blog on Facebook. Be sure to subscribe, too. OK, let’s get started.

Discussing religion in a blog dedicated to Old School Rules feels like discussing with a widow the $100,000 her late husband owed you. Sure, it needs to be done, but that doesn’t make it any less potentially awkward. The path of need versus awkwardness can be all too familiar territory when someone has a faith and tries to take it seriously. I’ll try to walk this path honestly and with consideration. In light of that, I’ve created Theology Thursday because 1) I love the Lord and 2) I like a little alliteration, too. Not every Thursday will be a Theology Thursday, but most theology posts will be on Thursday.

“How do you know when you’ve ticked off the local Unitarian Universalist church?
You wake up one morning and on your lawn is a ten feet high burning question mark.”

That being said, I’ll take a doctrinally sound megachurch over a small church with bad doctrine any day. The Prince of Preachers, Charles Spurgeon pastored what would be called a megachurch by today’s standards and I’d sell my WABAC machine to hear him preach.

But all other things being equal, I prefer a smaller congregation. Here’s why.

#1 The pastor actually gets to pastor

Pastor — noun, a person who exercises spiritual guidance over a number of people
Dictionary.com

He preaches the sermon… he’s at the back of the hall chatting with parishioners… he’s leading the Saturday morning mens’ Bible study… he’s at the Friday night family study… he’s running the members’ meeting and leading a mission trip to Slobovia… Wait!! is that him on a work day raking leaves??
He’s the anti-where’s-waldo!

I’m not saying the megachurch pastor isn’t a dedicated servant of God. I’m not saying his sermons aren’t glorifying God.  Far from it. Many of these men are my heroes and occupy much space on my bookshelves. (See earlier Spurgeon mention.)

I am saying that if you don’t know a parishioner’s name because there are 2,000 of them, it makes the far more intimate task of giving spiritual guidance qualitatively different.

Then there’s the issue that I’m sure many megachurch pastors loathe: being treated like a celebrity, not a shepherd. I’m not blaming the pastor for this. It must be a huge roadblock to relating to people in a genuine manner when they first think of you as, “Oh, it’s Pastor Ron who’s on the radio every day!!”

This kind of celebrity fawning always reminds of this classic Bugs Bunny clip.

If my family isn’t at church on Sunday, people notice.  Why?

Yeah, all of the above, but let’s just talk about the last one.  Accountability for attendance at a megachurch is a little like playing ecclesiastical “Where’s Waldo?”* because no one really knows if you’re there. Frankly, some  Sunday mornings — not most or even many, just one or two a year, OK? ☺— I need the extra kick in the backside of “brethren accountability” to help me get my butt ready and load up the van with the kids. (This will leads me to another post idea: The Importance Of Coffee To The Gospel)

Simply put, if the pastor goes off the deep end doctrinally, the plague of bad preaching is isolated to a smaller group. To put it another way, reach for your air sickness bag and then imagine that Westboro Baptist Church was big instead of a group of a few dozen mostly related losers.

#4 No one comes for the coffee bar

People go to church for many different reasons…

If a church doesn’t offer the last three, then it allows them to put greater emphasis on the the first three.

It’s not that coffee, business and working out are wrong. I love coffee. I love my business. I… love coffee and my business. I can’t sit here and write that a gym in a megachurch is morally wrong while at the same time saying my small church’s yearly camping trip is morally right — especially in sub-freezing weather — we are the Chosen Frozen. Both definitely fall under the category of morally neutral “extras”. But some extras are more cumbersome, distracting and less wise than others. While trying to describe this, I came across a quote that sums up the problem. Click on the link to read more.

Philosophy of what?? Read the article and discover how it takes “over 350 gallons a weekend and have over 150 volunteers to pull this ministry off”. I can’t help but think those resources could be better used. It is not the burden of the church to spend the significant amount of dollars required for a coffee bar and workout rooms.

For more a hilarious take on megachurches and all their extras, enjoy this episode of King of the Hill. While it’s far from a doctrinal statement of any sort, the parody of megachurches is hilarious.

#4.5 A different kind of youth pastor

Instead of the young guy with the spiky hair having a “rap session” with the teenagers in a room with a climbing wall at the megachurch, the teenagers are sitting with their parents hearing God’s word preached.

Man in congregation: “No, Pastor. They were going to drive back Friday, but with the back problems they’ve delayed things a few days.”

And most of the congregation knows what’s going on. I love the connectedness that is possible with a small church. 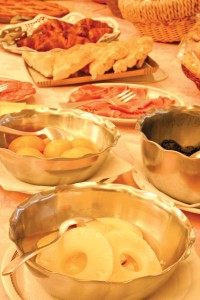 Or pot-providences.  (I believe that joke was first made by Martin Luther over a bowl of spaetzle.)

When megachurches have events the food is catered or bought in bulk and prepared by volunteers. Why?  You can’t have potlucks in a 2,000 member church. And if even you did, by the time you got to cousin Jeanie’s Rueben casserole, it’s all gone.  And what about when the Smokin’ Hot Wife makes the delicious dessert delicacy, dirt? What will you do?

What WILL you do??

Keep it Old School my friends,

Posted under Theology and tagged with megachurch
Comments (4)