“James Bond had one!”

So several years ago I’m sitting in the den of the “underground legend,” RB. In his seventies now and retired, he’s one of the most interesting friends I have. He earned the nickname underground legend in the most esoteric of fields, sleight of hand magic. He’s worked as a writer in Hollywood and also wrote one of the best selling computer books of all time. I’ve seen photos of RB from the 1960s and he looked like one of the guys from Madmen (without the drunkedness & adultery). He’s a devoted family man and a Superman geek.

He is also — and I say this with great admiration and affection — the oldest teenager in the world.

It’s 3 am and we’re sitting in his den/office/lair/batcave discussing anything and everything. Being men, this meant we eventually arrived at the topic of guns. RB says to me, “Why don’t you get an AR-7? James Bond had one.” Only a septuagenarian with a proper amount of teenager still in his soul would lead his conversational sales pitch with a James Bond mention.

He hands me what appears to be a rifle stock. The stock has a removable cap at the wide end. I remove it. The action, barrel and two eight round magazines are inside. RB mentions James Bond again. I assemble the rifle. Another James Bond mention. If you’re wondering what RB’s talking about, check out the YouTube clip from From Russia With Love . The assembly of the rifle begins at the 30 second mark and takes about 12 seconds. Moments later, another bad guy bites the dust.

Cool. A few months later I bought one.

The AR-7 has had several manufacturers before Henry, so let’s start with a brief history lesson. The AR-7 is a semi-automatic .22 caliber rifle. It was designed by Eugene Stoner. Its original intent was use as a “survival rifle” by downed pilots and crew. Still don’t follow? Once again, I will shamelessly turn to cartoons to explain myself… 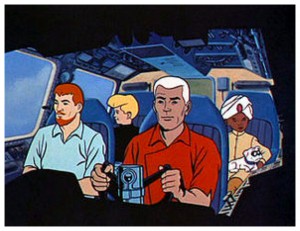 Race Bannon is piloting the Quest family and Hadji over enemy territory in a mission to fight the evil Dr. Zin. Suddenly, the plane is shot down by dinosaurs with laser gun eyes. Race lands the plane, but it is heavily damaged. They must trek (not enough people trek anymore) fifty miles to get back to safety. Before leaving the wrecked plane, Race grabs the AR-7. This weapon allows them to harvest a few rabbit suppers along the way, earning it the title of survival rifle. I guess somebody figured “Squirrel/plinking take-down rifle” just doesn’t sound as cool.

The Henry U.S. Survival AR-7 comes standard with a sturdy steel barrel covered in tough ABS plastic and then coated with Teflon for complete protection against corrosion. Plus, it’s engineered for perfect balance and the ability to maintain its tack-driving accuracy, even after thousands of rounds. Like the barrel, the receiver is also coated with a layer of waterproof Teflon for superior weatherproofing, waterproof protection, even in harsh salt water environments. Plus, the updated receiver is grooved making it easy to top it off with your favorite optics.

The rifle is currently marketed to backpackers (due its 16-1/2 inch length and 2-1/2 pound weight) and boaters (it floats!). There is one more group that figures into its target audience, but we will table that topic for a few paragraphs.

The initial AR-7 was manufactured by Arma Lite from 1959-1973. Manufacturer-wise, here’s what happened next.

For years the AR-7 didn’t have the greatest reputation for reliability. The complaints? Mostly constant jamming of ammo. Henry, a great company, has done much to change that. My experience with my Henry rifle has been virtually jam-free.

Keep it Old School my friends,

*Now that you’ve got your James Bond on, don’t forget to click the link at the top of this page and “like” Old School Rules blog on Facebook. Be sure to subscribe, too. OK, let’s get started.