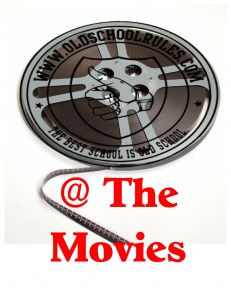 I love this movie. I grew up with many Walt Kowalskis. Capable men. Tough men. At times, grizzled men. Men that drank beer without opining on its taste or hops. Men that were flawed. Men that had a less than genteel sense of humor.

To borrow a line from Walt’s priest, the movie was “bittersweet.”

“Sweet” in that it brought back many childhood memories of my dad, my grandpap and their friends.
“Bitter” in that there are not a lot of Walts around any more.

This post will assume you have seen the movie. If not, stop now and get it now. I don’t have a big movie library. This is one is in it.

Walt’s grandson enters his grandmother’s funeral wearing a football jersey. His granddaughter is dressed like a low rent 80s Madonna. They are greeted with Walt’s complete derision.

On the other side, Walt kept his lawn in perfect condition. He kept his Gran Torino in immaculate condition. When Thau (Toad) came over to offer his labor, Walt gives him the job of cleaning and repairing the neighbor’s house.

Self-defense is an important personal responsibility

Understand, the only things I’ve shot recently are groundhogs, snakes and other members of the animal genus, varmintus painindabutticus. I pray I never have to draw down on someone to defend my family, but the circumstance may arise someday and if so, I want every tool available to defend my family. Those tools include good judgment, prayer, a big dog, a loud voice, a security system and, if necessary, the trained use of firearms. But the person who hates guns (and by extension, the second amendment, the NRA and Ted Nugent) would respond.

“But don’t you know what the statistics say about guns in the home?”

And don’t you know what Mark Twain (or Benjamin Disraeli) said about statistics?

“There are three kinds of lies: lies, damned lies and statistics.”

And then they’d reply …

“But that kind of thing is the responsibility of the police.”

And I’d reply with…

“You can delegate authority, but not responsibility.”

That’s enough monologue/dialogue for now. I think you get the point. If I have a fire at my house, after I get the family in a safe place I reach for the water hose while standing at a safe distance. I don’t wait until the fire department arrives. A firearm is a tool. Or as Walt said, “when things go wrong you gotta react quickly”

There’s a doctrine of reformed theology called total depravity. To put it in layman’s terms (which, by the way, are the only terms this wannabe armchair theologian should use) total depravity acknowledges that we bring nothing to God except our sins. It’s the opposite of self-righteousness. Even our apparent “righteousness is as rags”. Gran Torino is certainly not The Passion of the Christ, but this movie — especially its conclusion — certainly has Christian overtones of sacrifice. And Walt does carry a sense of total depravity throughout the movie. He knows he can never take away the evils he had committed decades earlier.

When Sue, seeing how Walt treats her younger brother says, “Walt, you’re a good man,” Walt gravely replies, “I”m not a good man.” Indeed, Walt. None of us are.

Men should act differently
in the presence of women…

Walt cusses like a sailor, but not in front of women. When Sue drops an F-bomb in front of Walt, he sternly reprimands her.

… and men should act differently
in the presence of men.

Entire forests have been killed to publish books about how men should be genteel with women. Forests that could have otherwise been used to make baseball bats, rifle stocks or beer barrels. Tragic, I know. But how many times do you read, “Quit being such a Nancy boy around your buds!!”

Here’s what I mean. True story time. I was there. It’s 1980. Two guys are working out together in the weight room of the local YMCA. There are about six other guys in the room and everybody knows everybody. The gym is all men and all regulars. To get to weight room you had to go to through the mens’ locker room so the room was always only men. One guy is at the squat rack. He has 315 pounds on the bar. The bar is resting on his shoulders. He goes down into a deep squat.

Factoid: Thirty one years ago the gym short fabric of choice was cotton,
a much less elastic fabric than the one’s available today. Back to the story.

At the bottom of the deep squat the cotton shorts split right up the middle of the backside. The squatter rose up from the squat and racked the bar. He was unharmed. The rest of the room was crippled with laughter. The squatter reached around and realized the extent of the rip in his shorts. Now the squatter was laughing. The incident stopped everybody’s workout for a good five minutes. The squatter was mocked mercilessly, yet entirely appropriately. He gave back as he good as he got or at least as good as a guy with aerated butt cheeks can give. 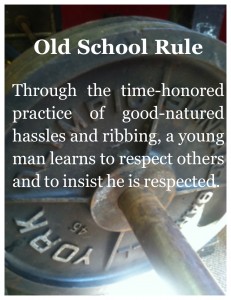 There are plenty of things beyond your circle of buds that don’t give a rat’s behind about you and will eat you alive if you let them. Unemployment, illness, death, fill-in-the-blank can all be brutal events in a man’s life. If a man has been toughened up a little in the safe arena of his friends and family, he will be much better equipped to deal with the far tougher events outside that arena.

There’s a scene in the movie that embodies this. I’m warning you before you click on the clip that the language is more than rough. Definitely not work-friendly. And I wouldn’t recommend anyone use this particular coarse patois. This movie is a work of fiction, not a documentary and definitely not a sermon.

Yet even with this half pound of disclaimers, it offers lessons to be learned.

Racism is both real and wrong

There’s no denying it. Walt spews racist garbage. This has caused a few viewers to consider the movie racist. I’m a big ol’ white guy, so my ability to comment on such matters is no doubt handicapped by my lack of melanin. With these provisos stated, here’s what I think. This movie portrays racism. It’s doesn’t promote racism. Furthermore, I think to portray a man like this without the racism would be like portraying the civil war without slavery. It was a fact. It was evil. It was part of the story.

Gran Torino is a story of redemption and you can’t have redemption without sin. Walt’s racism is one of the sins from which Walt needs redemption. Men like Walt were real and numerous but here’s a hopeful thought:  most of their offspring (my generation) saw their racism for what it was and have abandoned it and see it for its evil and foolishness.

I love the scene in the movie where Walt is stuffing his face with grub at his neighbor’s kitchen table. Later on more gifts of food are brought to his home and he begins to refuse them until the realizes, “Is that that chicken and dumpling thing…” Then he ushers them in, commenting, “Better than beef jerky, I’ll tell ya.”

Thank you notes are great.
Flowers smell nice.
But food is the gold standard of gratitude and thoughtfulness. If you are going through hard times, a meal sent over by friends is a reminder in your guts (literally and metaphorically) that someone cares.

A cool car. Marrying the best girl ever. Addressing elders properly.  The value of mentoring. Even the value of lawn care. There are many other Old School lessons to be had from this movie. Please share yours in the comments section of this post.

Because this question was brought up on the Old School Rules facebook page (please go there and Like us), I’ll answer it here.

Gran Torino is on the short list of films during which
it is permissible for an Old School man to shed a manly tear.

PS: If you’re new to Old School Rules, please take a few moments to read some posts and look around. Also…

#1 While we rush our awards to our honorees, don’t forget to click the link at the top and “like” Old School Rules blog on Facebook. Be sure to subscribe to the RSS feed, too.

#2 Spread the news about Old School Rules to your friends and encourage them to “like” us on FB and subscribe to the RSS feed, too!

Posted under entertainment,Theology and tagged with gran torino
Comments (7)