It begins with a hard cooked egg.
The egg is then wrapped up with a good ground sausage.
The sausage covered egg is lightly breaded then deep-fried.
A hearty food that lives in the nether world between snack and full-blown meal. Which is it? When the grub has this much Old School goodness, who cares? 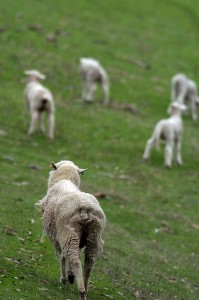 These delicious Scotch eggs originated over 500 years ago with Scottish shepherds.
Wanting to take a food with them on the long trip to market that would fill the belly and pack well, the Scotch Egg was born.

Or at least that’s the story that was told to me ten years ago at the festival where I first discovered these awesome protein-filled gut bombs. Here’s the true story: The London department store Fortnum & Mason invented Scotch eggs in 1738. Not as easy to romanticize as the Scottish shepherd riff, but who cares? These things rock.

Before getting down to a recipe, here’s why you’re going to like these things:

Scotch eggs have the characteristics of a great bar food

Who would have ever thought that something that begins with a food as bland as a hard-cooked egg could end up so good? But it does!

Quick– what other food can be described exactly the same way? WINGS!! You’ve eaten the birds wings, now eat them eggs, boy!

Throw a few of these in your backpack or cooler. Don’t forget the hot sauce.

You can convert the unconverted

I admit it. I like being a food evangelist and so should you. A few weeks back I was on a business/personal trip down in Arkansas. My friend down there took me to his favorite barbeque joint and his favorite catfish joint. (Some of the best Old School grub is found in joints.) As a Yankee, I don’t get much of either of those dishes and I was in seventh heaven. But here’s the deal: so was he. There’s something quintessentially Old School about sharing the joy of your great grub discoveries with others.

That’s what you’re going to get when you serve someone their first Scotch egg. They’ll look at this bread egg shaped thing and think, “Huh?” Then you’ll cut it open and they’ll, “Oh!” Then they will dip it in some hot sauce, taste the breading, egg and sausage and think, “Mmmmm.”

First, the right way to hard cook eggs.
Put about an inch of water in a pot. Put a steamer basket in that. Bring water to boil. Place 6 or more eggs in basket. Let the eggs steam for 13 minutes. Remove eggs and immediately place in an ice bath. Let sit in ice bath for 5 minutes. No funky greenish-gray crap around the yolk. Delicioso! Thanks to Alton Brown for this method.

A word about exact amounts: the amounts will vary with how much meat and breading you want to wrap around each egg. Your Scotch eggs so your call. Exact amounts are important as this isn’t nuclear science; it’s something important.

That’s it. Now get off the computer and make some.

Keep it Old School my friend,

If I’ve introduced you to Scotch eggs, you owe me! So do the Old Man two favors:
#1 Don’t forget to “like” Old School Rules blog on Facebook. Be sure to subscribe to the RSS feed, too.
#2 Spread the news about Old School Rules to your friends and encourage them to “like” us on FB and subscribe to the RSS feed, too.
Posted under food and tagged with scotch eggs
Comments (5)