While you’re here, check out the BIG CONTEST page and win!

I have three sons ages four, three and two. My children are in the stage of life when they are invited to many birthday parties. I manage to attend some of these, too. So lately I’ve been seeing a lot of piñatas.

There are two types of piñatas… 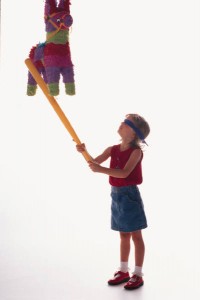 #1 The classic “whoop it with a stick” piñata

A cardboard figure filled with candy waiting for kids to beat the tar out of it. It’s a beautiful thing. Kids are filled with physical energy. Kids love candy. Swing a stick or wiffle ball bat and try to burst the thing. A picture can’t do this justice. For that matter, a video can’t either. You have to see it live to appreciate the awesome spectacle in kid-size miniature. The look of anticipation and planning in the kids’ faces. The older boys thinking, “Maybe if I hit it there it will break.” The younger kids thinking, “I can do this!!”

Or my three year old son, Steve thinking, “When one of the big kids break it, where should I stand to scarf up the most candy?” That’s boy’s a genius, I tell you what.

#2 The no-hit, pull string “What kill-joy weenie came up with this moronic idea?” piñata?

This piñata isn’t hit to give up its candy. Instead there are a couple dozen strings hanging from the bottom of it. Pull the wrong string, nothing happens. Pull the one right string and all the candy comes up. Before I address these piñatas seriously, let me talk about them from the gut. This is moronic. This is right up there with sponge wind chimes because the metal wind chimes make too much noise. OK, now a slightly more detailed response. This is going to go well beyond piñatas because the opponents of the classic piñata go well beyond that in their thinking. Proponents of these offer up two advantages.

These piñatas are supposedly safer. Wrong. With proper supervision, both are equally safe. 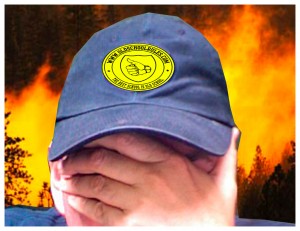 The traditional piñatas promote violence. Just typing this requires me to indulge in a prolonged face palm.

One of the things that every Old School Man discovers is in today’s world he must frequently take time to explain things that a mere generation ago would have been self-evident. So, here we have another Old School Rule. 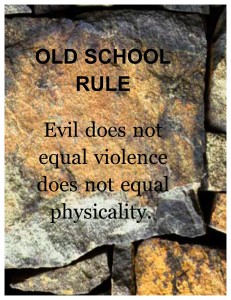 Evil. Sin. Hatred. Teaching a kid to hurt the innocent is all of those. Hitting a piñata with a stick is none of those. Hitting a piñata doesn’t teach a kid to hurt the innocent any more than chopping and splitting wood with an ax to heat their homes taught boys evil a hundred years ago.  Cutting into a ribeye at your local steakhouse today won’t make you a murderer. I am certain if the piñata was a dinosaur Steve would whack at it and then that same night cuddle up with this favorite dinosaur doll. It’s a party game and even a three year old boy gets that. Of course, he is not burdened with an advanced degree, just a three year old boy’s  “call it as I see it” common sense.

Violence. Let’s define violence as “physical harm against another person”. The problem comes when this is always defined as evil. Of course, many times it is evil and many times it is not. I want to raise my sons to know the difference and to be able to, if need be, act on the difference. If it’s right, I want them to be the like the young men that tackle the mugger and not, of course, the mugger.

If you’re thinking, “What does violence have to do with a piñata?”, I hear you. But read this commentator from MSN on the subject of no-hit piñatas.

Most of the responses agree that these are a misguided attempt at making people less violent. After all, most of us smacked a piñata as a kid, and paper mache did not turn out to be a gateway to the neighbor’s cat’s skull. My kids and their friends just had a great time causing blunt-force trauma to a piñata on their birthdays. I don’t think anyone is more violent because of it. But the truth is that none of the kids are less violent either. (OSR: So what? Hide-and-seek won’t make a kid “less violent” either, because neither one are intended for character education. They’re games.) As dumb as the no-hit piñata sounds, it’s actually a push towards human evolution: one we aren’t ready for. (OSR: No, it is simply as dumb as it sounds. Not a push towards anything worthwhile. Just d-u-m-b.)

Humans are a very violent species. We’ve had to be to survive. But violence is becoming an increasingly useless trait.

The writer is right in one respect. We live in a violent world. But a cause of much of the violence is the presence of evil. Evil, or sin or hatred, is the problem. Violence is often the result. Yet, sometimes violence can be the remedy for evil. The Allied soldiers who stormed Normandy beach, the stranger who tackles a mugger who just stole an old lady’s purse, are all committing acts of violence but are all in the right. To embrace this is to live in reality. To deny this is to create weak, pacifistic men.

Listen, I know you’re probably thinking, “Normandy beach? Muggers? We’re talking about piñatas.” You’re right. But I’m not the one to introduce an inappropriate big picture view to this. It’s the guy who looks at piñatas and wrote, “Humans are a very violent species. We’ve had to be to survive. But violence is becoming an increasingly useless trait.” Hopefully, I’m with you. IT’S A PARTY GAME!!

I think knowing the when and where and right and wrong of violence is something kids begin to learn early in life or at least once did. Here’s a great story about Teddy Roosevelt from the book Future Men

“When Theodore Roosevelt taught Sunday school for a time, a boy showed up one Sunday with a black eye. He admitted he had been fighting and on a Sunday, too. He told the future president that a bigger boy had been pinching his sister, and so he fought him. TR told him that he had done perfectly right and gave him a dollar. The stodgy vestrymen thought this was a bit much, and so they let their exuberant Sunday school teacher go.”

Finally, physicality is not violence or evil. We are physical, mental, emotional and spiritual creatures and should express ourselves in all of these ways. But let’s hear what the pull string  piñata crowd has to say (same guy from above)…

We enjoy hitting a piñata because we used to have to club walruses (or our neighbors if they tried to take our walrus meat). Now a majority of people simply swipe their credit cards at the supermarket when we want to eat walrus steaks.

No, it doesn’t have anything to do with walruses, elk, moose or even cows. Kids — my kids —  enjoy hitting a piñata because of the same reason they enjoy running around, screaming, making monster noises, pillow fights, and jumping off the couch onto my stomach (where I’m ready for it — hopefully!) — for the same reason I enjoy doing it with them. Because it’s physical and fun. It is one of the Old School joys of a young child’s life.

PS: While you’re here, check out the BIG CONTEST page and win!

Posted under fatherhood,recreation and tagged with pinatas
Comments (0)