In an effort to drop more than a few pounds, I’ve decided to adopt this bit of Old School wisdom to my diet. Breakfast is often skipped or rushed.

An Old School Man knows he’s kidding himself 95% of the time when he says, “I had to have a rushed fill-in-the-blank.” He knows he should say, “I had to have a rushed fill-in-the-blank because I didn’t plan properly.” Considering food is one third of the the big three necessities of food, clothing and shelter, it’s worth a little planning to get up (and therefore go to bed) a little earlier.

Advantages to the “royal eating” plan

In pursuit of this, here was this morning’s breakfast. 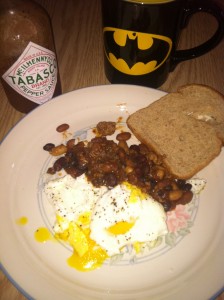 Two eggs over easy (Slightly botched in the execution)

Side of “fried chili” That’s some leftover chili fried for a little bit.  Frying the chili removes some of the liquid aspect, make it more side dish on a plate and less main dish in a bowl. If this still seems odd to you, just think of it as a side of beans, tomatoes and meat.

Tabasco I have no scientific proof for this, but I think the addition of breakfast heat to the morning (along with coffee, 10-20 seconds of cold water at the end of the shower and a traditional shave with a double edge razor) puts the brain at optimum kick-butt-take-names efficiency.

Coffee It’s so important I type it twice. Best served in one of my 8 Batman mugs. I have no scientific proof for this, either.

Glass of cold water (not pictured) Good to rehydrate after 8 hours of shut eye.

Spanish tortilla. Get the recipe here. Simply one of the best things you can do with eggs. The prep is a little more time consuming than most, but a big tortilla will feed you and several wingmen.

A home made breakfast burrito. Not taking about that thing that’s served up at a drive through window. Key words: home made. No recipe here. You don’t need one. Just ingredients. Fry up sausage, eggs, diced potatoes, green chilis, peppers, onions. Add cheese. Wrap in a flour tortilla. Slather (slather: good word) with hot sauce if you like and you’re ready to take on the world.

Meet up at the diner. Having breakfast with a friend is a vastly underrated practice. While there, eat up big.

Have a great kingly breakfast idea? Share it in the comments.