It’s been about 10 days since the last post. Why? Crazy work schedule, thousands of miles and eight states. It’s good to be back. Thanks for stopping by. 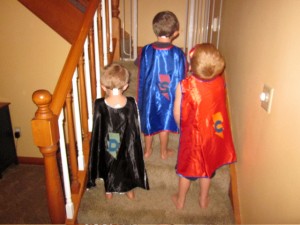 My three boys in their capes. If this doesn't give me comic book street cred, I don't know what will.

When most people hear the term “comic book”, they almost automatically want to add the word “geek”. And when most people hear the phrase “comic book geek”, they picture a nerdy guy, living in his mom’s basement at the age of 34, nasally voice, rockin’ a Green Lantern t shirt (with mustard stains) with NO social skills who is to the ladies as vegetarians are to barbeque.

Then there’s Scott Walton, owner of The Vault Comics & Games. He’s into comic books as much as the geekiest of geeks. He even performs as nobility at a renaissance festival! But he manages to do all of this while maintaining an Old School “one of the guys” demeanor. He even skydives. And unlike other comic book lovers, he managed to do what I did: marry a woman waaaay too attractive for him. No wonder Scott owns a comic book shop. All the geeks want to be him. (Heck, right now YOU might want to be him!!)

With all of this in mind, when OSR heard of DC comics rebooting all of their books, “the 52”, we had to go to Scott for his comments.

What would you do if you had a clean slate to start from?  Live your life a different way, make different decisions.  Wear different clothes, take a different job.  These are questions we always want to know.  On a different scale, DC Comics just answered that question.  Starting with the September titles, every title including Batman and Superman relaunched their titles with a number one issue.  This was nothing to be scoffed at since Action Comics (where Superman made his first appearance) just hit 900 issues!  If they came out regularly that means that this comic has been published for 75 years!!

This move was made to gain back a share of the market that they had lost year after year to Marvel comics (You know, Spider-Man, Captain America…those guys).  After the month had finished, it seems that the experiment worked, so far.  From Superman being a down on his luck young reporter working for a rival newspaper to Lois Lane, Green Lantern not being Hal Jordan, or Superboy being a test tube baby, they really changed a lot of things.

I am a Marvel guy at heart, but thought I would give these new comics a try.  What did I get, well some surprises and some disappointments.  Unlike most things, I like to focus on the good stuff.  Action Comics with Superman, great fun and a new story.  You don’t know how it is going to end up.  OMAC, a rarely used character and a great homage to Jack Kirby (a great artist from the 60’s and 70’s).  Aquaman, everyone’s favorite scapegoat for powers taking one on the chin and actually coming out on top with a great story.

I think what I am saying is that if you had comics as a kid, come back and check some things out.  People need a chance to go back and relive some of their old memories.  If for $2.99 a month to check in on some old characters you remember as a kid, do it.  If nothing else, it is a great thing to share with your kids as well.

Oh and one last thing, everyone always has a story of how their mother threw away their collection.  Now you can make sure you hide them better!!