I became a grandfather for the first time a few days back. Hooray! Nine pound, eight ounce Noah is the first grandson of what I hope will be a very big Old School family tree.

So in keeping with my newly found geriatric tendencies, I’ve delegated this post to an loyal Old School bud and brother from another mother, Adam. His post shows Old School Rules go everywhere, even vampire movies.

I don’t know when this asinine trend started… the sympathetic vampire character. What a load of skubalon. I think I first noticed it in the Coppolla flick, Bram Stoker’s Dracula. It has reached full bloom in the Twilight series, a string of movies that shifts the Old School Man from wanting to drive a stake into the vampire’s heart to wanting to whoop the tar out of the metrosexual whiner because… he’s… just… that… annoying.

But enough with my words. I haven’t seen the movie yet, but Adam’s comments put it on my list.
Get yourself some garlic, a stake, a good mallet and head off with Adam to… 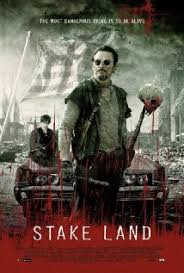 Where to start… the state of modern vampire movies has left me somewhat flat to say the least. Twilight (though my wife is a big fan… hey, nobody’s perfect) has set the genre back a decade at least. Call me old fashioned, or Old School if you will, I like my vampires to be monsters and treated as such. So we enter Stake Land!

Stake Land is part “The Road” & part “I Am Legend” (the classic story, not the Will Smith infected version). The premise is simple: it’s the end of the world brought on by a plague of vampires. The source of these vampires is never discussed or attempted to be explained by any silly pseudo-science. It just is. We follow our hero, known only as “Mister” and his young protégé Martin as they travel across the US seeking the safe harbor of “New Eden” a magical land where there are no vampires.

I won’t give away too much plot wise but rest assured it is a man’s movie. Mister played by Damici is a no-nonsense guy who does what needs to be done. There’s no deep soul searching about the nature of man vs. monster or any other such foolishness. Not to say that the movie has no heart. Lurking in between moments of horror & despair is some wonderful allegory about fathers & sons, friendship, loyalty and the meaning of family.

So that’s it. If you’re looking for a small studio movie with a great story & some vampires presented the way they should be check out Stake Land.

Until next time –A.

PS: Click on the Big Contest link above and enter… or I’ll make you watch Twilight.

Posted under entertainment and tagged with stake land, vampires
Comments (1)