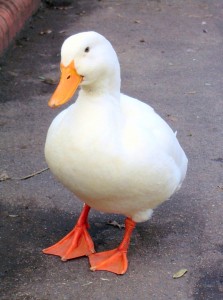 We got our six chickens a little less than a year ago. Here’s how that went down.

Step one: Think about getting chickens.

Step three: Prepare myself to infrequently (every 5-10 minutes) hear, “When are we getting the chickens?”

Step four: I get the chicks

Step six: Keep feeding them and get eggs, cleaning coop section of chicken tractor as needed. Let the chickens out in the morning. Put them back in the coop before dusk.

You can get more details regarding how my six chickens crossed the road here.

All things considered, chickens are great. Takes a few minutes a day. During the prime season (roughly March to November) the six chickens give us six eggs a day. See OSR tortilla recipe here. The benefits go beyond the eggs. Chickens in the backyard lend a semi-calming presence to the homestead. (Listen, if people can listen to recording of ocean waves and “earth sounds” — whatever that is? — claiming it helps them sleep, I can be calmed by poultry.)

And it gives my five year old yet another way to responsibly contribute to the household. He enthusiastically lets the chickens out and retrieves the eggs. His enthusiasm for cleaning the coop? Not so much.

If you’re thinking of poultry, NOW is the time to purchase from a farmer, your friendly neighborhood hardware store or farm supply store or online sources.

Here are the reasons in no particular order:

We have a pond.

We have the more than enough land. (Ducks take up very little room. Like chickens, they can be kept in a typical backyard. The coop or … get ready … this is great … Quack Shack … B-52s song stuck in your head … will only take up about 20 square feet.) During the day the ducks will have the run of the yard.

More eggs wouldn’t hurt. We won’t eat them all, but they make wonderful parting gifts to generate puzzled looks on the faces of our house guests.

I think the sight of six ducks running around the backyard is cool. The Smokin’ Hot Wife is thinking four ducks, but I’m big believer in the time honored tradition of having at least two back-up emergency ducks. You know how it is. It’s the holidays. Someone shows up with a gift for you and you’re empty handed. With a back-up emergency duck I can say, “Hey, I know this is a little over the top, but I really wanted to do something special for you this year. Here’s a duck.” It could happen.

It won’t be much more work than the chickens.

These reasons are good, but here’s probably the most accurate reason:

I just want to do it.

There can be plenty of reasons to do something. But if there are virtually no reasons not to do it, the fact that I want to do it is pretty substantial. I don’t have to explain why. Truth is, I can’t explain why. I just want some ducks. You want puzzled looks from people? Tell them you’re getting ducks.

Them: “Do you need more eggs?”
Me: “No. We have more than enough and give dozens away.”
Them: “Do you want them for the meat?”
Me: “No. We’re getting layers.”
Them: “Then why are you getting them?”
Me: “Just thought it would be nifty to have some ducks at the homestead.”
Them: “Uh-huh.”

When I was growing up I remember my dad had a ton of friends who did stuff for the time honored reason of “just because”. One man was into model trains. Another guy raised pigeons. My dad loved building self-designed models of everything from conestoga wagons to lighthouses. Even in his eighth decade, well into retirement, he’d get up at six in the morning, make his breakfast, go out to the garage (which he always referred to at “the shop”) and work on his projects until lunch.

Why did he and these guys do this? Again,they just liked it. Because they were Old School men they didn’t spend time naval gazing and over-thinking life. I think they knew or sensed that part of God’s common grace to us is the variety interests we do not share.

These Old School men didn’t waste anytime giving a rat’s behind about what somebody else thought, either. It never occurred to them to ask, “Will my model trains make me look nerdy?”

And more importantly, my dad didn’t look down on or question another man’s interest. This enabled him to see the inherent virtues in areas for which he himself had no interest. When Dad would look at another craftsman’s work and say, “That’s slick,” he was saying a lot in those two syllables. To him, “slick” meant clever, well-executed and resourceful. It didn’t matter that he didn’t have any interest in model trains or pigeons. It was the transcendent values he most appreciated. If Dad was a trendoid, nerd-sensitive, Nancy boy, he would have robbed himself of the values of another man’s work.

So in summary, get yourself some ducks.

Posted under DIY,homestead,lifestyle and tagged with raising ducks
Comments (1)

One Response to We’re Getting Ducks