A mild winter and the brief stretch of unusually warm March weather meant different things to different people. To me it meant work. Yard work, that is.
This post was started in mid-March and is finally being posted mid-May. That’s how crazy busy it’s been. Here’s my summer’s to do list. I’ll try to put some Old School lessons, insights and generally non-authoritative  musing throughout the list.

DATE mid -March: I’m typing this on the third day of what I hope will be only a three day reprieve from double digging the beds. The garden is twelve 4×8 raised double dug beds. After the second bed was done I wrote in Facebook:

The arena: my second 4 X 8 raised garden bed.
The contest: double digging and adding compost to the 32 square feet.
The contestants: my aching bad back vs. my pride.
The winner: my pride with an assist from naproxen. Garden bed #2 is done.

UPDATE May 16: Several untilled beds still mock me. I mock back. Truth is, I have it on good authority the dirt will be there next spring and almost as good authority that I will be walking above it. Those that aren’t tilled for this spring will be done this fall, having been enriched with compost and ready to go 2013 Spring. I’m in this for the long run.

I’ve promised my boys a tree house. God willing, they will have it this summer. 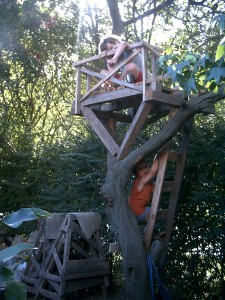 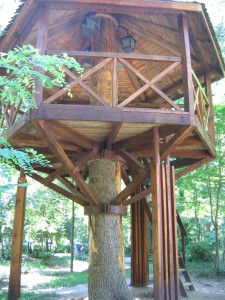 Hopefully the treehouse
will be more impressive than this one …

…but probably won’t be as impressive
as this one.

DATE mid -March: The chicks and ducklings will be arriving mid-April and there’s nothing like fast growing chicks and ducklings to encourage me to employ my minimal carpentry skills. Chicken coops are about as low tech a building project as it gets. Birds, thankfully, have never felt to comment on a lack of feng shui. We’ll feed the chickens some good organic feed for six to seven weeks and then … the chickens visit the big coop in the sky, which happens to be located in my gut and the guts of my friends.

After that another round of fryers begins in early June. The again in mid-August. At least that’s the current plan.

If you hold up one of these close to your ear, you can hear barbeque.

UPDATE May 16: Chicken tractor built. As of this writing I’m about three weeks from twenty-six delicious organic fed chickens. Deeeeeee-lish. Thankfully, I found someone locally that does the slaughtering at a very reasonable price. I was ready to do this myself, but I think my neighbors don’t need to see in a blood splattered apron again.*

Whenever I’d mention to someone that I was raising chickens for meat, the person’s next question would be, “Are you going to kill them yourself?” Not, “Why are you doing this?”. Not, “Is it hard to take care of them?” With that in mind, here’s why I decided to hire out the task.

Observation: baby chicks stay cute for, maybe, two weeks. After that they go through a very awkward teenager period. After that? A delicious sandwich and barbeque period. Ducks, on the other hand, are perma-cute.

Who wouldn’t want to have ducks?

DATE mid -March: I’m hoping a friend’s goats will cooperate and give birth to two Alpine females, because that’s what we’re hoping to raise. This will open the door to raw milk and cheese making. (Yeah, that phrase felt as stupid typing it as it did when you read it.)

UPDATE May 16: We now have three twenty day old goats. The expected twins turned out to be triplets, two does and a buck soon to be banded (think “snip-snip). Prepping their area in the barn and putting up fencing is a top priority as the charm of the daily goat dung* on our deck has ceased.

*There’s gotta be a blog with that name.

I thought I’d take a break from the fun and farm to list a task I’m actually dreading. I’m six feet three inches tall and that’s about as high as I’m looking to be. But those gutters are not going to clean themselves … unless I can train monkeys to do it. Gutter Monkey® … genius.

Tom Sawyer was onto something with his whitewash delegation program. Unfortunately, I don’t have enough juvenile foot traffic for this to work.

I like mowing my lawn. Why? I have a riding mower. So mowing is me sitting down, enjoying a beverage and listening to a good audiobook or podcast. It’s me time. Call it a redneck mani/pedi. But I can’t use the riding mower on a section of my lawn that’s a steep incline. So I’m planting four feet wide swath of strawberries. I did the same thing last year, but one four feet wide patch wasn’t enough. Two will be. Score!

Clean up fallen trees at edge of woods

Tolkein lied in The Lord Of The Rings. Trees do not walk. They just lie there. And I have several fallen ones lying down on the job right at the edge of my yard and woods. I’m seriously considering leaving one of them there, carving it up a little with a chainsaw and painting it to look like a giant number two pencil. It will replace the odd looks I’m missing out on by not wearing a blood splattered apron. (See earlier chicken comments.)

Split 8 cords of wood for next winter

Did I mention I have a PhD? Yes, I have a post hole digger. This will go a long way  to letting the chickens free range safely, not to mention letting my four young sons free range safely. Incidentally, both groups are fond of making noise and peeing outdoors.

I used to think it was a matter of having too much stuff, but much of the minimalist school of thought is a bunch of pseudo-philosophical hokum (“hokum” — good word). The truth is, I’m not Cain from the seventies series Kung Fu, roaming the earth with just a satchel and a wicked roundhouse kick. I’ve got stuff and it needs to be organized. The train table mentioned here is begging for more work and the basement has to be done to do it. Every play Tetris? If you were to see my storage attic you’d think I was the world’s worst Tetris player because I’ve manage to completely fill an area that could handle ten tons of stuff with only two tons of stuff. I truly hate this kind of work. Why? Because it not only necessitates asking “Do I need this?” a thousand times, it brings up questions like:

This was scratched off the list when my “cow connection” didn’t have the calves she expected. Given the previous items on the list, it’s probably best. I’ll need something to do next summer.

Truth be told, this post is a public sharing of my personal to do list and I wouldn’t be offended if you didn’t give a rat’s toches about it. But I hope you don’t feel that way. I hope you’re like me. When I’m over a bud’s home and I see something he’s done that’s pretty slick, nifty or cool (the triumvirate of appealing qualities) I think about doing it myself. Often it’s something I’m well-acquainted with, but the act of seeing somebody doing it — especially if he’s just another putz like me — gets my butt in gear.

And trust me, dear reader, I am another putz like you. Even putzier.

3 Responses to An Old School Spring/Summer To Do List