… get your Old School Rules Tip of the Day 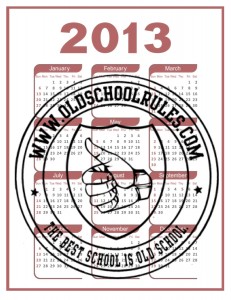 A big part of my personal goal list for 2013 is to live a more down to earth, authentic Old School life.

Whether it’s in weight loss, entrepreneurship, athletics, achievement is rarely built on one singular action. Instead it’s built on thousands, if not hundreds of thousands, of small steps. Few if any of these small steps will be based on “secret method” or “revolutionary technique”. Instead these steps have their foundation in strength of character and the willingness to do the work again and again when reward seems very distant.

Becoming more Old School is like this. It’s not one big thing. It’s thousand of small steps that add up.

And OSR will be sharing these “small steps” on our Facebook fan page on a daily basis. You’ll get inspiring quotes, great examples, needed reminders and, because it’s Old School, the occasionally needed kick in the backside. That’s 365 ways to get some Old School in ya!

*As declared by OSR, and we should know.