The Value Of Mindless Morning Work 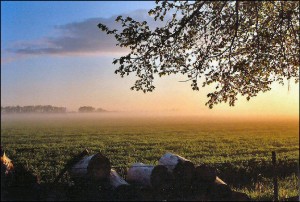 About 150 years ago, the day of a typical Old School Man (back then called “a man” and frequently “a woman” because then almost everybody was Old School) might begin like this:

My mornings, nowhere near as ambitious, can include*:

*Specific tasks vary with time of year and amount of ambition

“My brain has a standard transmission”

You know any of those people that wake up ready to literally hit the ground running? They keep their running shoes at the edge of the bed. They get up. Slip into their running shorts and shoes, stretch a few minutes and then head out the door running. Know anybody like that? Yeah, I hate them, too. (If you’re that kind of person and you’re reading this you have my respect. And I still hate you.☺)

Then there are the people whose brains work that way. Bible students who live under the “no read — no feed” rule, meaning they won’t eat anything until they’ve spent some time in the Word. These folks hit the books running. Asking me to get in the Word in the morning without coffee is like asking an octogenarian to eat a steak without his dentures. Sure, he’ll get it down, but it ain’t gonna be pretty.

I think of these people as having an automatic transmission. They can go from zero to sixty at 0-dark-thirty in the morning. I’m not that way. Wish I was, but I’m not. Maybe it’s a limitation that’s in my genes or just in my mind, but either way it’s there.

My brain has a standard transmission and it helps if it can spend a few minutes in first and second gear before getting on the highway. That’s where morning chores come in. Look at that list again.

None of that work is brain or body taxing. It is just enough to ready for fourth gear, jump in the shower (3Ss) and ready to start my day with the added benefit of knowing the livestock are taken care of until supper.

Other ways to do it. 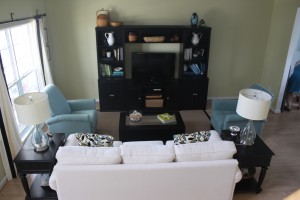 For the record, this is a file photo, not my home. I don't know why it's important for me that you know that. It just is. Maybe it's the white couch. Yeah, that's it. The white couch. Who owns a white couch? Not people with kids. Noooooo.

In discussing this post with one of the blogs readers in a Facebook message, he offered his version:

Here’s the point (or at least something semi-pointy):

Front loading your morning with mindless physical tasks that need to be done is a great, Old School way to start your day. It’s not about chickens and goats. It’s about the principle. Mindless tasks first thing in the morning do three things.

Your Old School Homework
Figure out what your “chicken and goats” are.
Start tomorrow.
Get up early and get them done.

2 Responses to The Value Of Mindless Morning Work