Wilford Brimley Will Kill You In Your Sleep

While you probably recognize Wilford Brimley as an actor, oatmeal pitchman and advocate for diabetes victims, you probably don’t realize how Old School he is…

Before acting, Brimley worked as a ranch hand, wrangler, blacksmith, and a bodyguard for Howard Hughes in the same day.

Brimley’s actual first name is Anthony. He uses his middle name of Wilford because no one has the guts to address Brimley by his first name.

Wilford Brimley was in the movies True Grit, The China Syndrome and The Thing. So Brimley has fought the Pepper gang, nuclear radiation and space aliens. What have you fought today, Nancy boy?

Wilford Brimley spoke up AGAINST a ban on cockfighting. (This is not a joke. Not that this blog or even Brimley is pro cockfighting itself. He stated his support was based on “respect for individual rights”.)

Brimley has played in the World Series of Poker Main Event. He did not win because of his inability to bluff. Wilford Brimley never bluffs.

This blog is always G-rated, so I’ll just say I believe this commercial contains at least three double entendres and one rarely seen quintuple entendre.

Recipes is in quotation marks because this is more a “short list of stuff to add to oatmeal”. I’ll assume you already have the oatmeal made and are good to go. 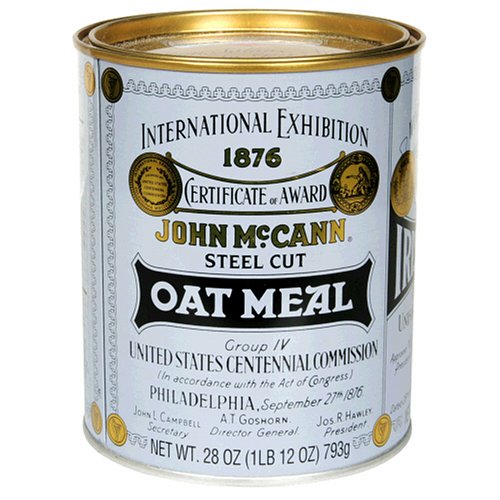 Oatmeal is not stuff that comes in individual flavored packets. That’s some strange aberration better labeled oatmeal dust. It is only fit for weak, spoiled children or those that want to be. Oatmeal should not come in small envelopes. Oatmeal should be in canister shapes (metal or cardboard), sacks or in your belly.

I’ve always been a Quaker Oats man, but have recently discovered (but not tasted) John McCann Steel Cut Oat Meal. This is some Old School lookin’ oatmeal.

Look at that can!! A can like that could only could contain three things: haggis, oatmeal or gunpowder. That’s Old School.

It may be a “duh” choice, but that doesn’t mean it should not be mentioned. Had a big bowl of oatmeal this morning with a moderate dollop — dollop: this word is not used enough — of peanut butter. Threw in some stevia. Good eats.

Another “duh” choice. Here’s one option you might not think of: pistachios.

Put in a few shakes of Tabasco and a chopped up fried egg. Have a few strips of bacon on the side. You ask, “Why bacon?” Don’t ever ask that question on this blog again. Ever.